9. Are they happy with their lives or not?

a. They are very busy.

c. Yes, they are contented with what they are having at present.

“farmer” can be replaced by:

b. Goodbye. See you again.

d. Nice to meet you.

Identify the one underlined word or phrase A, B, C, or D that must be changed for the sentence to be correct (2 points): 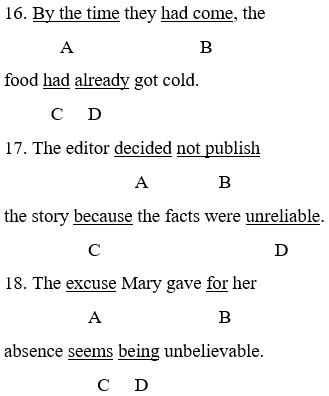 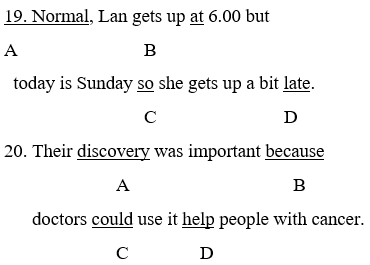 Give the correct form of words (1 point):

Choose a sentence which is closest in meaning with the given one (2 points):

31. We usually have English lessons every Monday and Thursday.

a. We usually have English lesson twice a week.

b. We usually have English lessons twice a week.

d. We usually have English lesson once a week.

32. Athough they have to work hard, they love their job.

a. They love their job even though they have to work hard.

b. They love their job unless they have to work hard.

c. They love their job because they have to work hard.

d. They love their job when they have to work hard.

a. It takes us four hours taking the exam.

c. It is a four-hours exam.

d. We finish the exam at four o'clock.

a. I suggest going out for a drink.

c. We are going out for a drink.

35. They usually walk in the park after dinner.

a. They used to walk in the park after dinner.

b. They are used to walk in the park after dinner.

c. They are used to walking in the park after dinner.

d. They used to walk in the park after dinner.

36. I wish I had been able to come to your birthday party.

a. I regret not being able to come to your birthday party.

b. I regret not to come to your birthday party.

c. Coming to your birthday party makes me regret.

d. I feel regretful when not coming to your birthday party.

10. Are you contented with your present job?

11. The fire alarm went off when smoke rose.

Read the text below and choose the correct word or phrase for each space (2 points):

Match the sentences, clauses or phrases in column A with the ones in column B to make meaningful sentences (2 points):

Write the second sentence as similarly in meaning as the first one. Use the word given in brackets. (2 points).

Choose the one word or phrase - A, B, C or D - that best completes the sentence:

7. ___________ he was not a musician himself, Lawrence Hammond developed an electronic keyboard instrument called the Hammond organ.

You may use the telephone every day but how much do you know about it? The telephone was invented by Alexander Bell in 1876. Bell was born in Scotland in 1847. Later he went to live in the US. Alexander Bell was always interested in sound. He wanted to be able to send sound through a wire. He had a workshop in his house in America and did many experiments there.

One day, while he was doing an experiment in his workshop, he was careless and spilt some burning liquid onto his clothes. Talking into his telephone, Bell said: “Mr. Watson, I want you to come over here immediately, please.” His assistant, Watson, was in another room far away from the workshop. However, he heard Bell clearly on his own telephone. Quickly, he ran to Bell’s workshop. “Mr. Bell, I heard every word you said!” Watson shouted excitedly. Bell finally succeeded. He had invented the first telephone. Later other inventors made better ones.

21. Which of these following is true?

A. Bell did only one experiment and he succeeded.

B. Bell discovered the telephone in 1847.

C. Bell was the owner of a workshop in his house in America.

22. Where did Bell settle down?

24. What did he do many experiments for?

A. to express feelings through musical instruments

B. to send sound through a wire

C. to give a request to his assistant

D. to hear his assistant’s voice

25. What did other inventors do later?

A. made telephones useless

B. made telephones disused

Choose the one word or phrase - A, B, C or D - that best completes the sentence or substitutes for the underlined word or phrase:

12. A computer consists of hardware and software.

15. Many people lost their home in the Earthquake. The government is trying to establish more shelters to care for __________ .

Choose the underlined part among A, B, C or D that need correcting:

16. Dennis used to smoking a lot a year ago.

17. This new dictionary has been translate into ten languages.

18. The air conditioner who is in the sitting room is out of order.

19. It took him a long time to get used to drive on the left.

In factories, mobile robots are already used to carry out a large number of the distribution and assembly tasks while human beings carry out research and produce plans for new products. Among the numerous jobs on the farm, robots will drive tractors, keeping their eyes on the ground in front to guide the tractor along a straight line.

The majority of the robots used at present do not look like human beings at all because their design is chiefly functional.

22. In factories what are robots used to do?

24. Why don’t robots at present look like human beings?

a. Because they are widely used at home.

b. Because they are mainly used in factories.

c. Because they are only used to guide tractors.

d. Because they are mainly produced according to their function.

25. Which of the following statements is NOT true about robots?

a. They will be used to do the cleaning.

b. In the near future they will be used to cook.

c. They are already used to carry out the distribution tasks.

d. They will be used to drive the tractor.

An arm-chair which has a record-player built into it has just been designed by a British engineer, Stephen Court.

The armchair (30) ________ like an ordinary armchair with high back. However, each (31) ______ the two sides of the chair has three loudspeakers inside to reproduce middle and high sounds. Low sounds are reproduced a pair of loudspeakers in a hollow space under the seat. Anyone (32) ________ sits in the chair hears sounds coming from all around his/her head.

Because we cannot tell the exact source from which low sounds come, it doesn't matter that they come from underneath or behind. It is the higher sounds (33) ________ from the sides of the chair that create a stereo effect.

These sounds travel only a few inches to reach the listener's ears. Consequently, it takes only a little power (34) ________ the music sound very loud. Only a small amount of sound leaks (35) _____ from behind the chair into the room to disturb others. Most of the sound is absorbed by the listeners.