8. Sperm whale population are at risk due to hunting.

11. Water can be held on the land by vegetation.

13. Many reliable methods of storing information ___________when computers arrived.

14. This park is the orphanage where lots of orphaned and abandoned animals are taken care of.

Choose the words or phrases that best complete this passage:

Read the passage, then choose the correct answer:

Most people are afraid of sharks, but they usually do not know very much about them. There are more than 350 kinds of sharks, and all of them are meat eaters. Sharks are useful because they eat sick fish and keep the oceans clean. Sharks do not have ears. However, they can "hear" sounds and movements in the water. Any sound or movement makes the water vibrate. Sharks can feel these vibrations, which help them find food. They also use their large eyes to find food. Most sharks see best in dim light. They often hunt for food at dawn, in the evening, or in the middle of the night. Scientists want to learn more about sharks for several reasons. For example, cancer is common in many animals, especially in people. However, it is rare in sharks. Scientists want to find out why sharks almost never get cancer. Maybe this information can help people prevent cancer too.

A. feel vibrations and hear with their ears

C. feel vibrations and see with their large eyes

A. they see best in dim light

B. they are hungry at night

C. there is more food then

D. other fish are sleeping

A. people know how to prevent cancer

Find the one mistake (A, B, C or D) in these sentences: 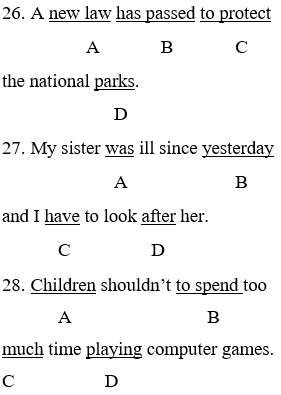 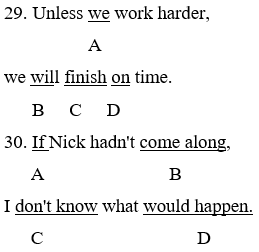 Rewrite each of these sentences without changing its original meaning:

31. I had a bad headache yesterday so I didn’t go to school.

32. The scientists are studying the problem carefully.

33. Somebody had already reported the accident before I phoned.

34. These students should have finished the tasks by the time their teacher came back.

9. Mary's children are used to _____ after school every day. They don't have to walk home.

13. The regulation of the competition will be announced _______ on TV next week.

14. The peasants depend on a good harvest for their existence.

15. She is a famous _______. She is very interested in protecting wild animals from extinction.

Read the passage carefully, then choose the correct answers:

The whale is the largest mammal in the world. Since the whale is shaped like a fish, why is it still considered a mammal? The fact is that the whale didn’t live on land a very long time ago. However, during its thousand of years of living in water, the whale gradually becomes structured like a fish. Thus, the whale has adapted to marine life. Nevertheless, though the whale resembles the fish externally, it still has characteristics of a mammal.

Unlike other sea creatures, the whale is a warm blooded animal. It keeps itself warm in the cold water with a layer of blubber. ‘Blubber’ is a layer of oily tissue that protects the internal organs and retains heat.

a. An animal that lives on land

b. An animal that lives in the sea

c. An animal that eats meat

d. An animal that drinks milk from its mother

17. What does the word “it” at the end of the first paragraph refer to?

a. It protects the internal organs

b. It retains heat

19. Which sentence is NOT true about the whale?

a. The baby whale is hatched from an egg

b. It is the largest animal on earth

c. The baby whale is fed on its mother’s milk

d. The whale is a warm blooded animal

20. Which sentence is true about whales?

b. They are only the largest animals in the sea

c. They used to live on land

d. They only live in warm water

Complete these sentences with the appropriate form of the words in parentheses:

Identify the one word or phrase (a, b, c or d) that must be changed for the sentence to be correct:

26. Wilshere will win the election if he campaigned harder.

27. The match was cancelled due to the weather was bad.

28. Hurricanes from the Gulf of Mexico have been caused considerable damage to coastal cities in Texas.

29. The children are only allowed watching television on the weekend.

30. The oceans contain many forms of life that has not yet been discovered.

Finish the second sentence so that it has a similar meaning to the first one, beginning with the given words or phrases:

31. Our heating isn’t working and I feel cold.

32. You can’t make a cake without flour.

33. The fire destroyed the forest completely.

34. I didn’t go to school on time this morning because the bus was late.

Choose one word or phrase - a, b, c or d - that best completes the sentence:

8. Uruguay defeated Argentina in the final match and became the first _______ in history of the world cup.

Choose the best option a, b, c or d to be used for each of the blanks to complete the following passage:

Read the passage carefully, then choose the correct answers:

Visitors who want to see the city’s attractions have several transportation options. The use of private cars is discouraged, since parking is limited and the streets of the historical district are narrow. Fortunately, excellent alternatives are available. The subway system provides fast, inexpensive transportation to all areas of the city, from 6:00 am to 12 midnight. Bus service operates 24 hours a day, for those who prefer to travel above ground and sneak in some extra sightseeing on route. Those of you who want to make sure that you see all the tourist attractions may be especially interested in our Visitor’s Tour buses, which may stop at all points of interest throughout the city. For your convenience, special visitor’s passes for all forms of public transportation are sold at hotels throughout the city, along with maps and schedules for transportation routes. Subway tickets may be also be purchased at subway stops.

21. Which services stops at night?

22. What is this announcement about?

23. Where are tickets sold?

24. Why may some people prefer travelling by bus?

a. Buses are faster

b. The subway is more expensive

d. People can see more of the city

25. What should visitors NOT do in the city?

a. Travel at rush hour

Find a mistake in the four underlined parts of each sentence:

Finish the second sentence so that it has a similar meaning to the first one, beginning with the given words or phrases:

31. When did you start playing for the national football team?

34. He plays the guitar for a small group so that he can earn some extra money.

35. He didn’t become a famous film director until he was 54.

6. The staff are working at weekends ______ delay the project any further.

7. That book is about a famous anthropologist. It's about the people in Samoa ________ for two years.

8. I can't believe that Jim is marrying the vice-president's daughter. That they would get married is _______.

10. How many countries took part in the first World Cup?

11. The movie Schindler's List was ______ on the novel Schindlerc Ark written by the Australian writer Thomas Keneally.

B: Yes. I think you come from Thailand.

Give the correct form of the given words to complete the following sentences:

Find a mistake in the four underlined parts of each sentence:

Choose the best answer to complete the passage:

Choose the best option to make the correct sentence from the suggested word:

a. Bob Dylan who is a composer and an American musician, was born in 1941 in Minnesota.

b. Bob Dylan is an American composer and musician who was born in Minnesota.

c. Bob Dylan, an American composer and musician, who was born in Minnesota in 1941.

d. Bob Dylan, who is an American composer and musician, was born in 1941 in Minnesota.

a. He traveled widely throughout the United States singing about the poor.

b. He widely traveled around the United States to sing about the poor.

c. He traveled the United States widely singing about the poor.

d. He traveled widely all over the United States with the poor's singing.

a. His songs of greatly social and political protest influenced young people in 1960s.

b. He greatly influenced young people in the 1960s with his songs about the political and social protest.

c. His songs of political and social protest greatly influenced young in the 1960s.

d. He wrote songs of political and social protest greatly influenced young people in the 1960s.