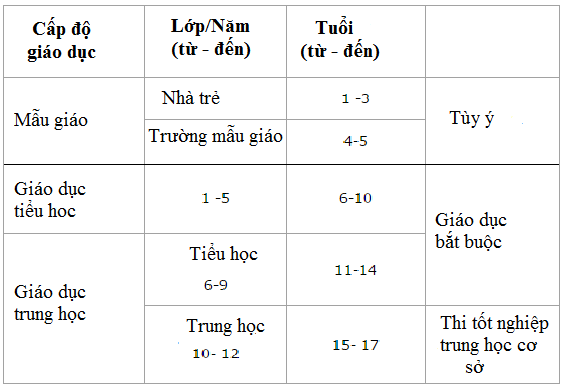 A: When do small children in Vietnam go to nurseries?

A: How long is the pre-school stage?

B: In principle 3 years, but it depends.

A: You mean it's according to the child's ability?

A: When do children go to the primary school?

A: How long does the primary school education last?

In Vietnam, the pre-school period is completly optional. Children can either go to nursery, kindergarten or not.

A: I'm not sure, but I think there are certain similarities and differences between the school system in Vietnam and that in England.

B: I think so, too. But what differences do you know?

C: As I know, first both systems have the same three levels of education, and the starting age of schooling.

D: But in England, as I know, there isn't such a strict and unreasonable rule of starling age of schooling.

A: What do you mean?

D: OK. As I'm told, in England a pupil can attend a class if he or she has enough capacity as required.

B: About the differences I see there are a lot.

B: The academic year. In Vietnam there are only two periods of schooling in a year, each of which lasts about five months or so.

A: I see. In England an academic year is divided into three by season.

D: And one more difference: in England students needn't take any exam to enter the upper secondary schools.

C: But we should not ignore the most major difference: the tuition fee for nursery, primary and secondary educations. For these three levels, people do not pay any tuition in England. I mean they are totally free and compulsory.