• An apple was given to him. (Một quả táo đã được trao cho anh ta.)

• He was given an apple by me. (Anh ta đã được tôi trao cho một quả táo)

• It is thought that he stole his mother’s money.

• He is thought to have stolen his mother’s money.

Ví dụ: Put your pen down → Let your pen be put down. (Bỏ cây bút xuống)

Ví dụ: Do not take this item.

1. Was this beautiful dress bought by Mary?

2. These old pictures won't be hung in the living room(by me).

3. This factory wasn't built (by the Greens) during the Second World War.

4. This house and these cars are going to be painted for Chrismas day by the Greens.

5. The new president will be interviewed on TV (by tsome people).

6. How many languages are spoken in Canada(by them)?

7. Have above sentences been finished?

1. Was this beautiful dress bought by Mary?

2. These old pictures won't be hung in the living room(by me).

3. This factory wasn't built (by the Greens) during the Second World War.

4. This house and these cars are going to be painted for Chrismas day by the Greens.

5. The new president will be interviewed on TV (by tsome people).

6. How many languages are spoken in Canada(by them)?

7. Have above sentences been finished?

1. John gets his sister to clean his shirt.

2. Anne had had a friend type her composition.

3. Rick will have a barber cut his hair.

4. They had the police arrest the shoplifter.

5. Are you going to have the shoemaker repair your shoes?

6. I must have the dentist check my teeth.

7. She will have Peter wash her car tomorrow.

8. They have her tell the story again.

1. John gets his shirt cleaned.

2. Anne has had her composition typed.

3. Rick will have his hair cut.

4. They had the shoplifter arrested.

5. Are you going to have your shoes repaired?

6. I must have my teeth checked.

7. She will have her car washed tomorrow.

8. They have the story told again.

1. My father waters this flower every morning.

3. Her mother is preparing the dinner in the kitchen.

4. We should clean our teeth twice a day.

5. Our teachers have explained the English grammar.

6. Some drunk drivers caused the accident in this city.

7. Tom will visit his parents next month.

8. The manager didn’t phone the secretary this morning.

9. Did Mary this beautiful dress?

10. I won’t hang these old pictures in the living room.

1. This flower is watered (by my father) every morning.

3. The dinner is being prepared (by her mother) in the kitchen.

4. Our teeth should be cleaned twice a day.

5. The English grammar has been explained (by our teacher).

6. The accident was caused in this city (by some drunk drivers).

7. Tom’s parents will be visited (by him) next month.

8. The secretary wasn’t phoned (by the manager) this morning.

9. Was this beautiful dress bought by Mary?

10. These old pictures won’t be hung in the living room(by me).

1. Have you sent the Christmas cards to your family?

2. The committee appointed Alice secretary for the meeting.

3. He hides the broken cup in the drawer.

4. They keep this room tidy all the time.

5. They all voted the party a great success.

1. Have the Christmas cards been sent to your family?

2. Alice was appointed secretary for the meeting (by the committee).

3. The broken cup is hidden in the drawer (by him).

5. The party was voted a great success (by them).

2. The teacher gave each of us two exercise books.

3. Someone will tell him that news.

4. They have sent enough money to those poor boys.

5. They have given the women in most countries in the world the right to vote.

2. Each of us was given two exercise books by the teacher.

4. Those poor boys have been sent enough money.

5. The women in most countries in the world have been given the right to vote.

1. The children looked at the woman with a red hat.

2. They have provided the victims with food and clothing.

3. People speak English in almost every corner of the world.

5. After class, one of the students always erases the chalk board.

1. The woman with a red hat was looked at by the children.

2. The victims have been provided with food and clothing.

3. English is spoken in almost every corner of the world.

5. After class, the chalk board is always erased by one of the students.

2. How are you going to deal with this problem?

3. How do you spend this amount of money?

4. I wonder whether the board of directors will choose Susan or Jane for the position.

5. How did the police find the lost man?

1. When will the work be done?

2. How is this problem going to be dealt with?

3. How is this amount of money spent?

4. I wonder whether Susan or Jane will be chosen for the position by the board of directors.

5. How was the lost man found by the police? 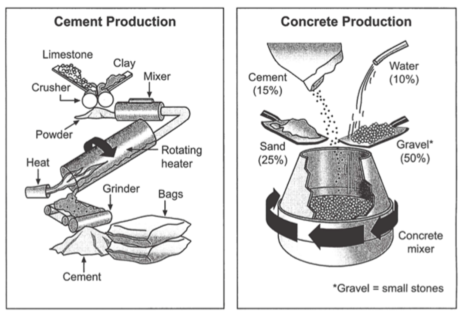 The first diagram (1-illustrate)_________the process of cement manufacture, and the second diagram (2-show)_________ the materials that go into the production of concrete.

It is clear that there are five stages in the production of cement, beginning with the input of raw materials and ending with bags of the finished product. To produce concrete, four different materials (3-mix)__________ together.