Question 1. The USA is one of the most culturally diverse countries in the world.

Question 2. She got up late and rushed to the bus stop.

Choose the best answer to complete each of the following sentences

Question 4. Thuy: "Thank you very much for helping the disadvantaged children here.

A. It's our pleasure.

Question 5. Last summer, we ___ to travel to Phu Quoc, which is considered the pearl island of Vietnam.

Question 6. Unable to remember _____, he walked around the neighborhood looking for his car.

A. where he has parked

B. where he had parked

C. where to park

D. where he was parking

Question 7. Sometimes at weekends, my father helps my mom with_____ meals.

Question 8. Don't put off doing your homework until tomorrow. Do it right now, _____?

C. have been chosen

Question 10. Face ID, which is an Apple's security technology for iPhone X, permits users _____ their devices just by looking at them.

A. I have nothing to tell you

Question 12. I deeply regret ____ to her so severely last night. She was badly hurt.

D. to be speaking

Question 13. It _______ half of your plate should consist of vegetables and fruits.

A. is suggesting that

C. is suggested to

D. is suggested that

Question 14. Mangkhut is the most powerful storm ______ Asia this year.

B. which is hit

Question 15. Some modern couples organize their marriage and work out the tasks and duties, which may gradually turn their marriage into a business or ______ relationship.

Question 16. Smartphones, laptops and tablets are the modern devices __ have changed the way we learn.

Question 18. It was in 1971 that (A) transatlantic supersonic (B) transportation became (C) commercially availability (D) .

Question 19. Even in (A) forest worshipping of some African tribes today, people worship (B) the gods of trees and villagers sacrificed (C) their lives to protect (D) the village.

Choose the sentence that best combines the two given

A. After his death, he received the bravery award in 1970.

C. Before his death, he received the bravery award in 1970.

Question 21. Electronic devices are bad for your eyes. Their radiation is very harmful.

A. Electronic devices that their radiation is very harmful are bad for your eyes.

B. Electronic devices which their radiation is very harmful are bad for your eyes.

C. Electronic devices, whose radiation is very harmful, are bad for your eyes.

D. Electronic devices, which are bad for your eyes, their radiation is very harmful.

A. It was said that warm sea surface temperatures help intensify tropical storms.

B. It is said to help intensify tropical storms by warm sea surface temperatures.

Question 23. The doctor told him not to talk during the meditation.

A. He has been told by the doctor not to talk during the meditation.

B. He was told by the doctor not to talk during the meditation.

C. He is told by the doctor not to talk during the meditation.

D. He was being told by the doctor not to talk during the meditation.

Question 24. "Don't forget to turn off the tap before you leave," Grandma said.

A. Grandma offered me to turn off the tap before I left.

B. Grandma suggested me turning off the tap before I left.

C. Grandma invited me to turn off the tap before I left.

D. Grandma reminded me to turn off the tap before I left.

Read the passage and choose the best answer

Jean spent her first few years in Hooper and her family moved to Otsego early in her life. She was only ten when her father died unexpectedly, leaving her mother to raise and support their family alone. Her mother soon went to work outside the home to provide for the family, and Jean, being one of the oldest, had to help care for her younger siblings. Although she had much responsibility at home, Jean thoroughly enjoyed school and was an excellent student. She went on to graduate 10th in her class at Otsego High School in 1953.

While still in high school, Jean met a young man named Charles "Chuck" Holly, at a dance in Alamo; and they were quite taken with each other. Over the next few years, their love for each other blossomed and they were married on February 24, 1953, while Jean was still in school. At the time, Chuck was serving his country in the military, and had come home on leave to marry his sweetheart. Unfortunately, shortly thereafter, he was sent overseas to serve in Korea for the next fifteen months.

Upon his discharge, the couple settled into married life together in the Plainwell, Otsego area. To help make ends meet , Jean went to work at the collection bureau in Kalamazoo for a while, before taking a job at the cheese company in Otsego. In 1964, Chuck and Jean were overjoyed with the birth of their son, Chuck, who brought great joy into their lives. Jean remembered how her mother was always gone so much working after her father died and she did not want that for her son, so she left her job to devote herself to the role of a mother.

A. be a housewife

B. support the family alone

C. work outside the home

D. work as a secretary

Question 26. What does the phrase make ends meet in paragraph 3 mean?

A. earn a lot of money

B. have a part time job

Question 27. Which is NOT true about Jean?

A. She was very happy when she got a baby.

B. She worked outside the home before she had a child.

C. She disliked staying at home and taking care of her child.

D. She quit her job to look after her baby.

Question 29. Which is NOT referred to Jean?

A. She went to high school.

B. She often did well at school.

C. She was a responsible girl.

D. She never helped her mother with household chores.

Question 30. The phrase taken with in paragraph 2 is closest in meaning to____.

A. served in the military

B. had a daughter

D. got married when she was a student

It is back-to-school time in much of the world. Calm, easy mornings are replaced with busy, hurried ones. Children wake up early and get ready for school. Many parents are also getting ready for work, helping their children and preparing food for lunches. But don't forget about breakfast! When things get wildly busy in the morning, some people (32)_______ breakfast to save time. But that may be a big mistake for students.

That is the finding of a 2015 study from Cardiff University in Wales. Researchers there looked at 5000 9-11 year-olds from more than 100 primary schools in the U.K. They looked at what the students ate (33)_______ breakfast and then their grades 6 to 18 months later. They found that the students who ate a healthy breakfast (34)_______ twice as likely to perform above average in educational activities. The researchers also found that unhealthy breakfasts - such as potato chips or a donut did not appear helpful to educational performance.

A good breakfast is not just helpful for school-aged children. We all may gain from eating something healthy first thing in the morning. A study from researchers at the University of Toronto in Canada found that a breakfast rich in protein and complex carbohydrates (35)_______ performance on short- and long-term memory. Carbohydrates and protein are especially important because (36)_______ a major effect on long-term memory. 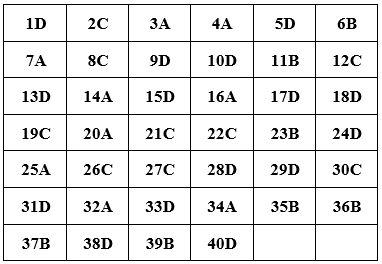