Mark the letter A, B, C, or D to indicate the word that differs from the other three in the position of the primary stress in each of the following questions.

1. I got the teaching job in the Happy Child Charity Centre just by chance.

2. Every month, the volunteer group go to remote and mountainous areas to help those in need.

3. Mother Teresa devoted herself to caring for the sick and the poor.

4. Our top priority is to clean and protect the environment in our neighbourhood.

5. Young people are now getting more and more concerned about environmental problems.

Mark the letter A, B, C, or D to indicate the word(s) OPPOSITE in meaning to the underlined word(s) in each of the following questions.

1. Many people who do volunteer work think they are more fortunate than others.

2. Public service announcement is a special advertisement for the community, normally about health or safety matters.

4. We are looking for camp helpers who are hard-working, energetic, and able to organise activities for young children.

5. Volunteering also means getting to meet people with a similar passion.

Orbis is an organisation which helps blind people of everywhere. It has built an eye hospital inside an aeroplane and flown it all over the world with an international medica team. Samantha Graham, a fourteen-year-old schoolgirl from England, went with the plane to Mongolia. Samantha tells the story of the Eukhtuul, a young Mongolian girl.

‘Last year, when Eukhtuul was walking home from school, she was attacked by boys with sticks and her eyes were badly damaged. Dr. Duffey, an Orbis doctor, said that without an operation she would never see again. I thought about all the things I do that she couldn’t, things like reading schoolbooks, watching television, seeing friends, and I realised how lucky I am.’

‘The Orbis team agreed to operate on Eukhtuul and I was allowed to watch, together with some Mongolian medical students. I prayed the operation would be successful. The next day I waited nervously with Eukhtuul while Dr. Duffey removed her bandages. “In six months your sight will be back to normal,” he said. Eukhtuul smiled, her mother cried, and I had to wipe away some tears, too!’

Now Eukhtuul wants to study hard to become a doctor. Her whole future has changed thanks to a simple operation. We should all think more about how much our sight means to us.’

106. What information can be learned from this passage?

A. the best way of studying medicine

B. the international work of some eye doctors

C. the difficulties for blind travellers

D. the life of schoolchildren in Mongolia

A. angry about Eukhtuul’s experience

B. grateful for her own sight

C. proud of the doctor’s skill

109. W hat is the result of Eukhtuul's operation?

A. After some time she will see as well as before.

B. Before she recovers, she needs another operation.

C. She can see better but can never have normal eyes.

110. What is the writer's main purpose in writing this passage?

A. to describe a dangerous trip

B. to explain how sight can be lost

C. to report a patient's cure

D. to warn against playing with sticks

Read the following passage and mark the letter A, B, C, or D to indicate the correct word or phrase that best fits each of the numbered blanks.

A YEAR WITH OVERSEAS VOLUNTEERS

I was with Overseas Volunteers (OV) for a year after leaving university, and I was sent to an isolated village in Chad, about 500 kilometres from the capital N'Djamena. Coming from a (119) ____ country, I got quite a shock, as conditions were much harder than I had expected. But after a lew days I got used to (120) ____ there. The people were always very friendly and helpful, and I soon began to appreciate how beautiful the countiyside was.

One of my jobs was to supply the village (121) ____ water. The well was a long walk away, and the women used to spend a long time every day (122) ____ heavy pots backwards and forwards. So I contacted the organisation and arranged to have some pipes delivered. (123) ____ these pipes were not really perfect, they still made a great difference to the villagers.

All in all, I think my time with OV was a good experience. Although it was not paid, it was well worth doing and I would recommend it to anyone (124) ____ was considering working for a charity.

1. Volunteerism is on the rise in the United States, especially among retired persons.

A. More and more American people, especially the retired, do volunteer work.

B. The number of volunteers in the United States is increasing faster and faster.

2. It is meaningful to save some pocket money for charity work.

A. Nobody thinks it is meaningless to loose money for charity work.

B. Saving some pocket money for charity work is a meaningful thing to do.

C. It means that we have to save some pocket money for charity work.

D. We mean to save some pocket money for charity work.

3. Our children are interested in giving away their old books to needy people.

A. Our children find it interesting to give away their old books to needy people.

B. For our children, it is interesting for needy people to give away their old books.

C. One of the most interesting things that our children do is to give away old books to needy people.

D. Giving away old books to needy people is one of our children’s hobbies.

4. Mary is disappointed with the volunteer work in this charity organisation.

A. The volunteer work in this charity organisation is disappointed at Mary.

B. Mary found the volunteer work in this charity organisation disappointing.

D. Mary found it disappointed to do volunteer work in this charity organisation.

Mark the letter A, B, C, or D to indicate the word whose underlined part differs from the other three in pronunciation in each of the following questions.

1. Smartphone can be a great learning ____ but you need to think of how to use it effectively.

3. Many young people carry a pair of earbuds as they are small, light, and ____.

4. Washing machine or vacuum cleaner can help you to ____ time while doing housework.

5. Velcro has gradually become a familiar ____ for shoes, jackets, and even spacesuits.

6. Most smartphones now ____ flash player as well as voice and video calls.

7. Many students prefer ____ assignments on their laptops to writing traditionally.

8. Mobile devices such as laptops or digital cameras can be charged by ____.

Mark the letter A, B, C, or D to indicate the correct to each of the following questions.

1. A correction pen is used for ____ your writing mistakes.

A. not to tell

A. not to worry

C. not worrying to

4. Don’t forget ____ your homework before coming to class.

A. is used for produce

B. is used to produce

Mark the letter A, B, C, or D to indicate the correct response to each of the following exchanges.

A. By no means

C. What a pity

D. What a wise choice

A. Of course. You’re right.

B. There is no hope about it.

Read the following passage and mark the letter A, B, C, or D to indicate the correct word or phrase that best fits each of the numbered blanks.

When Scotsman Alexander Graham Bell (106) ____ the telephone in 1876, it was a revolution in communication. (107) ____ the first time, people could talk to each other over great distances almost as clearly as if they were in the same room. Nowadays, though, we (108) ____ usc Bell’s invention for taking photographs, (109) ____ the Internet or watching video clips rather than talking. Over the last two decades a new (110) _____ of spoken communication has emerged: the mobile phone.

A. has been invented 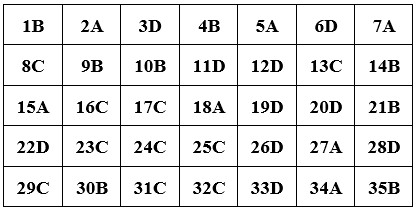