6. We are facing severe environmental pollution despite the fact that many world organizations are working hard to reduce it.

7. Water pollution is a result of dumping pollutants such as detergents, pesticides, oil, and other chemicals in rivers, which makes the water unclean.

8. Stop the degradation of the planet's natural environment and build a future in which humans live in harmony with nature.

A. coexist peacefully with

B. fall in love with

9. WWF was set up in 1961 and had its operations in areas such as the preservation of biological diversity.

10. The seashore was much polluted because of the amount of waste left there. All this rubbish is killing fish and other marine life.

Mark the letter A, B, C or D to indicate the underlined part that needs correction in each of the following questions. 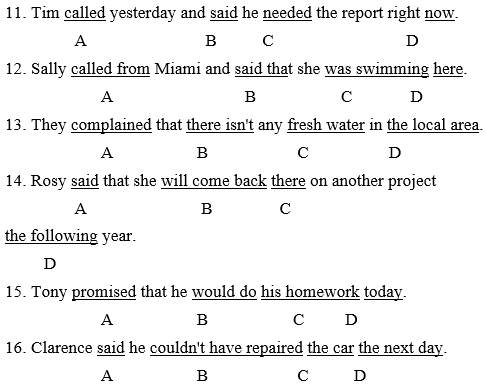 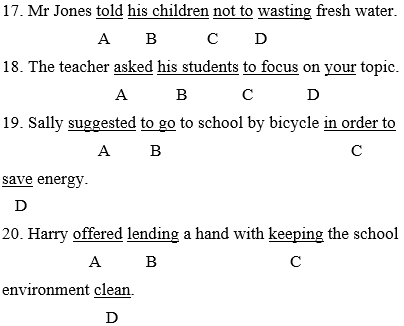 THE BALANCE OF NATURE

All the different plants and animals in a natural community are in a state of balance. This balance is achieved by the plants and animals interacting with each other and with their non-living surroundings. An example of a natural community is a woodland, and a woodland is usually dominated by a particular species of plant, such as the oak tree in an oak wood. The oak tree in this example is therefore called the dominant species but there are also many other types of plants, from brambles, bushes, and small trees to mosses, lichens and algae growing on tree trunks and rocks.

The plants of a community are the producers: they use carbon dioxide, oxygen, nitrogen to build up their tissues using energy in the form of sunlight. The plant tissues form food for the plant-eating animals (herbivores) which are in turn eaten by flesh-eating animals (carnivores). Thus, plants produce the basic food supply for all the animals of a community. The animals themselves are the consumers, and are either herbivores or carnivores.

Examples of herbivores in a woodland community are rabbits, deer, mice and snails, and insects such as aphids and caterpillars. The herbivores are sometimes eaten by the carnivores. Woodland carnivores are of all sizes, from insects such as beetles and lacewings to animals such as owls, shrews and foxes. Some carnivores feed on herbivores, some feed on the smaller carnivores, while some feed on both: a tawny owl will eat beetles and shrews as well as voles and mice. These food relationships between the different members of the community are known as food chains or food webs. All food chains start with plants. The links of the chain are formed by the herbivores that eat the plants and the carnivores that feed on the herbivores. There are more organisms at the base of the food chain than at the top; for example, there are many more green plants than carnivores in a community.

Another important section of the community is made up of the decomposers. They include the bacteria and fungi that live in the soil and feed on dead animals and plants. By doing this they break down the tissues of the dead organisms and release mineral salts into the soil.

21. Which of the following statements is TRUE?

A. All the plants in a wood are eaten by animals.

B. All the animals in a wood depend on plants for their food supply.

C. Plants and animals in a natural community do not interact with their non-living surroundings.

D. The balance of a natural community means there is no primary species.

A. having the most important position

B. covering the majority of the area

C. providing food for others

D. making up the whole community

A. some animals eat other animals

B. plants depend on the sun to grow

C. plants depend on the gasses in the atmosphere to grow

D. not every food chain starts with plants

25. Which of the following is NOT an example of carnivores?

26. What makes the links in a food chain?

A. the plants and the herbivores

B. the herbivores and the carnivores

C. the carnivores and the decomposers

D. the plants and the decomposers

27. Which of the following statements is NOT true?

B. There are more organism at the base of a food chain than at the top.

D. The consumers are at the base of a food chain.

A. They told their son that we had seen a strange man in the garden.

B. They told their son that they had seen a strange man in the garden.

C. They told their son that we saw a strange man in the garden.

D. They told their son that they saw a strange man in the garden.

A. Emily said that we were staying in tonight.

B. Emily said that they were staying in tonight

C. Emily said that we were staying in that night.

D. Emily said that they were staying in that night.

A. He said his girlfriend that he had bought a ring.

B. He said his girlfriend that he bought a ring.

C. He told his girlfriend that he had bought a ring.

D. He told his girlfriend that he bought a ring.

A. She said that they had been to work the day before.

B. She told that they had been to work the day before.

C. She said that they had been to work the following day.

D. She said that she had been to work the day before.

A. He encouraged the boys not to swim out too far.

B. He advised the boys not to swim out too far.

C. He warned the boys not to swim out too far.

D. He threatened the boys not to swim out too far.

A. Bob is sorry for not coming to Jane's birthday party last Friday.

B. Bob apologizes for not coming to Jane's birthday party last Friday.

A. Joanna suggested going for a walk because they had been working all day.

B. Joanna insisted on going for a walk because they had been working all day.

C. Joanna suggested going for a walk because they have been working all day.

D. Joanna suggested going for a walk because she had been working all day.