Mark the letter A, B, C or D on your answer sheet to indicate the word that differs from the other three in the position of primary stress in each of the following questions.

Mark the letter A,B,C or D on your sheet to indicate the word(s) CLOSEST in meaning to the underlined word(s) in each of the following questions:

Question 5: The air is naturally contaminated by foreign matter such as plant pollens and dust.

Question 6. The government is not prepared to tolerate this situation any longer.

A. look down on

B. put up with

C. take away from

Mark the letter A, B, C, or D on your answer sheet to indicate the word(s) OPPOSITE in meaning to the underlined word(s) in each of the following questions.

Question 7. The machine has been out of order since last month.

Question 8. Their classmates are writing letters of acceptance. 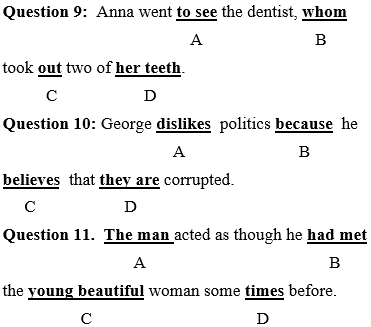 Mark the letter A, B, C, or D on your answer sheet to indicate the correct answer to each of the following questions.

Question 13 .Children who are isolated and lonely seem to have poor language and ________.

B. has to take

A. at the moment

A. consider rude it is

B. consider it must rude

Question 17. The lecturer's speech ______ for the majority of the listeners to get what he meant

C. was too clearly

Question 19. In my company, the director deputy usually _________the responsibility for organizing meetings and conferences.

A. Were they to arrive

B. If they arrive

C. Had they arrive

A. With all my heart

B. Never remind me

B. It doesn't matter

Mark the letter A, B, C, or D on your answer sheet to indicate the sentence that is closest in meaning to each of the following questions.

A. Lan has been said to win a special prize.

B. Lan is said to have won a special prize.

C. It is said that Lan has won a special prize.

D. They are said that Lan won a special prize.

Question 24. She was so busy that she couldn’t answer the phone.

A. She was very busy that she couldn’t answer the phone.

B. She was too busy to answer the phone.

C. She was too busy not to answer the phone.

D. She was very busy so that she couldn’t answer the phone

A. Mr. Brown started to buy this car five years ago.

B. It has been five years when Mr. Brown bought this car

C. Mr. Brown has had this car for five years.

D. It is five years ago since Mr. Brown bought this car

Mark the letter A, B, C, or D on your answer sheet to indicate the sentence that best combines each pair of sentences in the following questions.

Question 26. He is late again. I don't know the reason why.

A. I don't know the reason why he is late again.

B. Why he is late again is I don't know the reason.

C. Why I don't know the reason he is late.

D. The reason why he is late again I don't know.

Question 27: Mt. Everest is the highest mountain in the world. It's in the Himalayas.

A. Mt. Everest, the highest mountain in the world, is in the Himalayas.

B. Mt. Everest is the highest mountain in the world, it's in the Himalayas.

C. Mt. Everest is the highest mountain in mountain the world, is in the Himalayas.

D. Mt. Everest is the highest in the world, in the Himalayas.

Read the following passage and mark the letter A, B, C, or D on your answer sheet to indicate the correct word or phrase that best fits each of the numbered blanks

PROBLEMS OF WATCHING TELEVISION IN BRITAIN

British parents are always complaining that their children spend too much time gluing to the telly and not enough for other activities like sports and reading. A survey recently carried out on people's viewing habits (28)____ not disapprove it. It shows that young people in Britain spend on average twenty three hours a week in front of the television, (29)_______ works out at over three hours every day.

What is surprising, however, is the fact that the average adult watches even more: an incredible 28 hours a week. We seem to have become a nation of tally addicts. Just about (30)_______ household in the country has a television and over half have two or more.

According (31)_______ the survey, people nowadays don't just watch television sitting in their living room, they watch it in the kitchen and in bed as well.

The Education Minister said a few weeks ago that Britain's pupils should spend more time reading. Unfortunately, parents are not setting a good example: adults do less reading than young people. In fact, reading is on the bottom of their list of favorite pastimes. They would (32)____ listen to the radio, go to the cinema or hire a video to watch on their television at home.

Read the following passage and mark the letter A, B, C, or D on your answer sheet to indicate the correct answer to each of the questions.

Application for admission to the Graduate School at this university must be made on forms provided by the Director of Admissions. An applicant whose undergraduate work was done at another institution should request that two copies of undergraduate transcripts and degrees be sent directly to the Dean of the Graduate School. Both the application and the transcripts must be on file at least one month prior to the registration date, and must be accompanied by a non-refundable ten-dollar check or money order to cover the cost of processing the application.

Students who have already admitted to the graduate School but were not enrolled during the previous semester should reapply for admission using a special short form available in the office of the Graduate School. It is not necessary for students who have previously been denied admission to resubmit transcripts; however, new application forms must accompany all requests for reconsideration. Applications should be submitted at least eight weeks in advance of the session in which the student wishes to enroll. Students whose applications are received after the deadline may be considered for admission as non-degree students, and may enroll for six credits hours. Non degree status must be change prior to the completion of the first semester of study however.

An undergraduate student of this university who has senior status and is within ten credit hours of completing all requirements for graduation may register for graduate work with the recommendation of the chairperson of the department and the approval of the Dean of the Graduate School.

Question 33: What is the author’s main purpose?

A. How to apply to the Graduate School.

B. How to obtain senior status.

C. How to register for graduate coursework.

D. How to make application for graduation.

Question 34: According to the passage, where would a student secure application forms for admission to the university?

A. From the chairperson of the department.

B. From the Dean of the Graduation School

C. From the institution where the undergraduate work was done.

D. From the director of Admission

Question 35: Which of the following documents must be on file thirty days before the registration day?

A. Two copies of recommendations from former professors.

B. A written approval of the Dean of the Graduate School.

C. One set of transcripts and an English proficiency score.

Question 36: The phrase “in advance of” in line 13 is closest in meaning to:

B. on either side of

C. after the end of

Question 37: The author makes all of the following observations about non-degree students EXCEPT

A. they may be admitted after the deadline.

B. they may enroll for six credits hours.

C. they must change their status during the first semester.

D. they need not submit transcripts.

Question 38: The word “status” in line 16 could best be replaced by which of the following?

Question 39: Students who have already been admitted to the Graduate School

A. never need to apply for readmission.

B. must reapply if they have not been registered at the university during the previous semester.

C. must reapply every semester.

D. must reapply when they are within ten credits hours of graduation.

A. They may not register for graduate work.

B. They must pass an examination in order to register for graduate work.

C. They may receive special permission to register for graduate work.

D. They may register for graduate work at any time. 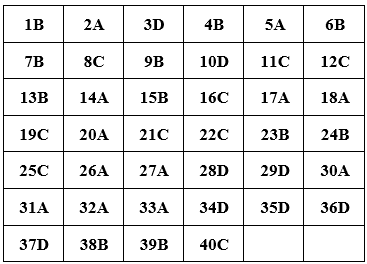