Mark the letter A, B, C, or D on your answer sheet to indicate the correct answer in each question.

A. an old interesting painting French

B. an interesting old French painting

2. Although David was ____ after a day’s work in the office, he tried to help his wife the household chores.

A. as much as twice

B. twice more than

D. twice as much as

6. Regional development activities have been carried out _______ ASEAN cooperation

9. UNESCO was established to encourage _______ among nations in the areas of education, science, culture, and communication.

A. will you know

B. do you know

C. you will know

C. wouldn't have been

Mark the letter A, B, C, or D on your answer sheet to indicate the word that is OPPOSITE in meaning to the underlined word(s) in each of the following questions.

13. The consequences of the typhoon were disastrous due to the lack of pre-cautionary measures.

14. Vietnam’s admission to the World Trade Organization (WTO) has promoted its trade relations with other countries.

Mark the letter A, B, C or D on your answer sheet to indicate the most suitable response to complete each of the following exchanges.

15. Cindy wanted to drive her best friend to have dinner at an Italian restaurant but her car couldn't start. Therefore, she had to borrow one from Nancy.

16. Minh and Lan are talking about Minh’s boyfriend

A. Well, it’s no use crying over spilt milk.

17. My brother tried very hard to past the driving test. He could hardly pass it.

A. No matter how hard my brother tried, he could hardly pass the driving test.

B. Although my brother didn’t try hard to past the driving test, he could pass it.

C. Despite being able to pass the driving test, my brother didn’t pass it.

D. My brother tried very hard, so he passed the driving test satisfactorily.

18. Ann jogs every morning. It is very good for her health.

A. Ann jogs every morning and it is very good for her health.

B. Ann jogs every morning, which is very good for her health.

C. Ann jogs every morning and then it is very good for her health.

D. Ann jogs every morning that it is very good for her health.

Mark the letter A, B, C, or D on your answer sheet to indicate the word that differs from the rest in the position of main stress in each of the following questions.

Read the following passage and mark the letter A, B, C, or D on your answer sheet to indicate the correct answer to each of the questions

Coincident with concerns about the accelerating loss of species and habitats has been growing appreciation of the importance of biological diversity, the number of species in a particular ecosystem, to the health of the Earth and human well-being. Much has been written about the diversity of terrestrial organisms, particularly the exceptionally rich life associated with tropical rain-forest habitats. Relatively little has been said, however, about diversity of life in the sea even though coral reef systems are comparable to rain forests in terms of richness of life.

An alien exploring Earth would probably give priority to the planet’s dominants, most-distinctive feature - the ocean. Humans have a bias toward land that sometimes gets in the way of truly examining global issues. Seen from far away, it is easy to realize that landmasses occupy only one-third of the Earth’s surface. Given that two thirds of the Earth’s surface is water and that marine life lives at all levels of the ocean, the total three-dimensional living space of the ocean is perhaps 100 times greater than that of land and contains more than 90 percent of all life on Earth even though the ocean has fewer distinct species.

The fact that half of the known species are thought to inhabit the world’s rain forests does not seem surprising, considering the huge number of insects that comprise the bulk of the species. One scientist found many different species of ants in just one tree from a rain forest. While every species is different from every other species, their genetic makeup constrains them to be insects and to share similar characteristics with 750,000 species of insects. If basic, broad categories such as phyla and classes are given more emphasis than differentiating between species, then the greatest diversity of life is unquestionably the sea. Nearly every major type of plant and animal has some representation there .To appreciate fully the diversity and abundance of life in the sea, it helps to think small. Every spoonful of ocean water contains life, on the order of 100 to 100,000 bacterial cells plus assorted microscopic plants and animals, including larvae of organisms ranging from sponges and corals to starfish and clams and much more.

A. the Earth’s surface

25. Which of the following conclusions is supported by the passage?

A. Ocean life is highly adaptive.

B. More attention needs to be paid to preserving ocean species and habitats.

D. The sea is highly resistant to the damage done by pollutants

26. Why does the author compare rain forests and coral reefs?

A. They are approximately the same size.

B. Both have many different forms of life.

D. Most of their inhabitants require water.

28. Which of the following is true about the ocean according to the passage?

B. It contains more species than land.

C. It contains a vast majority of life on Earth.

D. It occupies one-third of the Earth’s surface.

29. The author argues that there is more diversity of life in the sea than in the rain forests because ______.

A. there are too many insects to make meaningful distinctions

B. marine life-forms reproduce at a faster rate

C. more phyla and classes of life are represented in the sea

D. many insect species are too small to divide into categories

Read the following passage and mark the letter A, B, C, or D on your answer sheet to indicate the correct answer to each of the questions.

Reading to oneself is a modern activity which was almost unknown to the scholars of the classical and medieval worlds, while during the fifteenth century the term “reading” undoubtedly meant reading aloud. Only during the nineteenth century did silent reading become commonplace.

One should be wary, however, of assuming that silent reading came about simply because reading aloud was a distraction to others. Examinations of factors related to the historical development of silent reading have revealed that it became the usual mode of reading for most adults mainly because the tasks themselves changed in character.

The last century saw a steady gradual increase in literacy and thus in the number of readers. As the number of readers increased, the number of potential listeners declined and thus there was some reduction in the need to read aloud. As reading for the benefit of listeners grew less common, came the flourishing of reading as a private activity in such public places as libraries, railway carriages and offices, where reading aloud would cause distraction to other readers.

Towards the end of the century, there was still considerable argument over whether books should be used for information or treated respectfully and over whether the reading of materials such as newspapers was in some way mentally weakening. Indeed, this argument remains with us still in education. However, whatever its virtues, the old shared literacy culture had gone and were replaced by the printed mass media on the one hand and by books and periodicals for a specialized readership on the other.

By the end of the twentieth century, students were being recommended to adopt attitudes to books and to use reading skills which were inappropriate, if not impossible, for the oral reader. The social, cultural and technological changes in the century had greatly altered what the term “reading” implied

A. a status for readers specialized in mass media

B. a requirement for readers in a particular area of knowledge

D. a limited number of readers in a particular area of knowledge

31. The development of silent reading during the last century indicated_________.

A. an increase in the number of books

B. a change in the status of literate people

C. an increase in the average age of readers

D. a change in the nature of reading

A. silent reading had not been discovered

B. people relied on reading for entertainment

C. few people could read to themselves

D. there were few places available for private reading

33. All of the following might be the factors that affected the continuation of the old shared literacy culture EXCEPT _____.

A. the printed mass media

B. the specialized readership

D. the diversity of reading materials

A. for everybody’s use

A. change people’s attitudes to reading

B. explain how reading habits have developed

C. encourage the growth of reading

36. It can be inferred that the emergence of the mass media and specialised reading materials was an indication of_________.

A. an improvement of printing techniques

B. an alteration in educationalists’ attitudes

C. a change in the readers’ interest

D. a decline of standards of literacy

37. Which of the following statements is NOT TRUE according to the passage?

A. Reading aloud was more common in the past than it is today.

B. The decline of reading aloud was wholly due to its distracting effect.

C. Not all printed mass media was appropriate for reading aloud.

D. The change in reading habits was partly due to the social, cultural and technological changes.

Mark the letter A, B, C, or D on your answer sheet to indicate the sentence that is closest in meaning to the sentence given in each of the following questions.

38. You can look up this word in the dictionary.

A. There are a lot of words in the dictionary for you to look at.

B. You can find the meaning of this word in the dictionary.

C. You should buy this dictionary to find the word you need.

D. The dictionary contains a lot of words except the one you need.

39. You must never take your helmet off while you are riding a motorcycle.

A. When you are riding a motorcycle, wearing a helmet is not a must.

B. You needn't wear a helmet whenever you are riding a motorcycle.

C. Helmets must be worn at all times when you are riding a motorcycle.

D. If you are riding a motorcycle, you needn't wear a helmet.'

40. It was a mistake of you to lose your passport.

A. You shouldn't have lost your passport.

B. Your passport must be lost.

C. There must be a mistake in your passport.

D. You needn't have brought your passport. 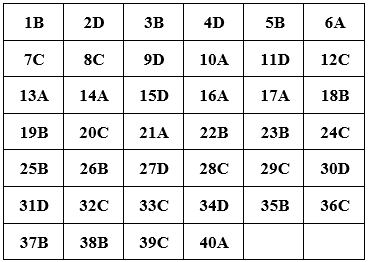