Mark the letter A, B, C, or D on your answer sheet to indicate the word that differs from the other three in the position of the primary stress in each of the following questions.

Mark the letter A, B, C, or D on your answer sheet to show the underlined part that needs correction.

Question 5: Mrs. Stevens, along with (A) her cousins (B) from Canada, are (C) planning to attend (D) the firework display in Da Nang, Vietnam.

Question 6: If one type of manufacturing expands (A) , it is like (B) that another (C) type will shrink considerably (D) .

Question 7: For thousands of years, man(A) has created sweet-smelling (B) substances from wood, herbs and flowers and using them (C) for perfumes or (D) medicine.

Mark the letter A, B, C or D on your answer sheet to indicate the correct answer to each of the following questions.

Question 8: I was tired when you saw me because I____for the exam.

B. have been studying

C. had been studying

Question 9: Mountain gorillas are an endangered species ________ habitats are being badly destroyed.

Question 10: His speech was careful and______, but his words seemed to make no sense.

B. to be killed

C. to have killed five

D. to have been killed

Question 13: Species become extinct or endangered for _______ number of reasons, but the primary cause is the destruction of habitat by human activities.

Question 14: Make sure you ______ up the data on your computer, because you might get a virus.

Question 16: Indiana University, one of the largest in the nation, is located in a ____ town.

Question 17: The hotel was terrible, but the wonderful beach_____ our disappointment.

A. came down with

B. made up for

C. got through to

D. faced up to

Question 19: Some scientists say that it is still not too late to minimize the effects of climate change_____enough money and effort are invested in correct projects.

Mark the letter A, B, C, or D on your answer sheet to indicate the most suitable response to complete each of the following exchanges.

Question 20: Thomas and Peter are meeting after a long time.

A. I am going on holiday next week.

B. Pretty busy, I think.

D. I am working here.

Question 21: George and Frankie are talking about their hobbies.

A. What are opinion!

B. There‟s no doubt about it.

D. Your opinion is exactly.

Mark the letter A, B, C, or D to indicate the word or phrase CLOSEST in meaning to the bold and underlined part in each of the following questions.

Question 22: We decided to pay for the car on the installment plan.

A. cash and carry

Question 23: I told you clearly and definitely not to write your answers in pencil, Smith!

Mark the letter A, B, C, or D to indicate the word or phrase OPPOSITE in meaning to the bold and underlined part in each of the following questions.

Question 24: These were the people who advocated using force to stop school violence.

Question 25: Names of the people in the book were changed to preserve anonymity.

Mark the letter A, B, C, or D to indicate the sentence that is closest in meaning to each of the following question.

Question 26: The doctor said, “You really ought to rest for a few days. Jasmine."

A. The doctor strongly advised Jasmine to take a few days' rest.

B. The doctor suggested that Jasmine should take a short rest.

C. Jasmine's doctor told that she should rest for a few days.

D. It is the doctor's recommendation that Jasmine should take a short rest.

Question 27: The last time I saw her was three years ago.

A. I have seen her for the last three years.

B. About three years ago, I used to meet her.

C. I haven’t seen her for three years.

D. I saw her three years ago and will never meet her again.

Question 28: It was essential to persuade him to change his mind but you didn’t.

A. You should have persuaded him to change his mind.

B. You must have persuaded him to change his mind.

C. You should persuade him to change his mind.

D. You may persuade him to change his mind.

Mark the letter A, B, C, or D to indicate the sentence that best combines each pair of sentences in the following questions.

Question 29: He failed his driving test the first time. As a result, he took it again.

A. He failed his driving test the first time and so he therefore took it again.

B. He failed his driving test the first time and he therefore took it again.

C. He failed his driving test the first time which he took it again.

D. Failing his driving test the first time and he therefore took it again.

A. If I come home late, you’d better take the keys.

B. You’d better take the keys in case I come home late.

Read the following passage and mark the letter A, B, C, or D to indicate the correct word or phrase that best fits each of the numbered blanks

A surprising number of popular spectator sports, for example football or baseball, (31)______ in Europe or the USA in the nineteenth century. This did not happen by chance. It was the (32) ______ of changes in the way people lived in those places at that time. Until then, more people lived In the country than in towns. They worked in small groups and had no regular time off. All this changed with the growth of factories and industry in the nineteenth century, first in Europe and (33) ______. In the US

A. For the first time, most people began to live in towns, and they found themselves with regular free time. They had more leisure time than ever before. This resulted in the need for organized entertainment. Suitable games developed or were invented, typically team games, in which the crowd could (34) ______ sides and become involved. This gave people some of the entertainment they need in their free time. The recent explosion in TV, with the introduction of satellite and cable channels, has caused an increase in (35) ______ for sports as entertainment. The money TV has broughtto games such as football, tennis and baseball means that spectator sports will certainly go on playing an important part in our lives. 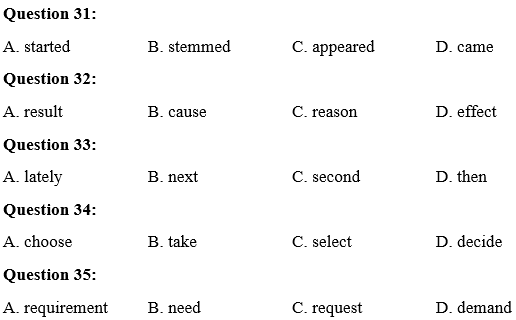 The advent of the Internet may be one of the most important technological developments in recent years. Never before have so many people had access to so many different sources of information. For all of the Internet’s advantages, however, people are currently becoming aware of some of its drawbacks and are looking for creative solutions. Among the current problems, which include a general lack of reliability and numerous security concerns, the most crucial is speed.

First of all, the Internet has grown very quickly. In 1990, only a few academics had ever heard of the Internet. In 1996, over 50 million people used it. Every year, the number of people with access to the Internet doubles. The rapid growth has been a problem. The computer systems which run the Internet have not been able to keep up with the demand. Also, sometimes, a request for information must pass through many routing computers before the information can be obtained. A request for information made in Paris might have to go through computers in New York, Los Angeles and Tokyo in order to obtain the

required information. Consequently, the service is often slow and unpredictable. Service also tends to be worse when the Internet is busiest - during the business day of the Western Hemisphere - which is also when companies need its service the most.

Some people are trying to harness the power of networked computers in such a way as to avoid this problem. In 1995, a group of American universities banded together to form what has come to be known as Internet II. Internet II is a smaller, more specialized system intended for academic use. Since it is more specialized, fewer users are allowed access. Consequently, the time required to receive information has decreased.

Businesses are beginning to explore a possible analogue to the Internet II. Many businesses are creating their own “Intranets”. These are systems that can only be used by the members of the same company. In theory, fewer users should translate into a faster system. Intranets are very useful for large national and international companies whose branches need to share information. Another benefit of an Intranet is an increased amount of security. Since only company employees have access to the information on the Intranet, their information is protected from competitors. While there is little doubt that the Internet will

eventually be a fast and reliable service, industry and the academic community have taken their own steps toward making more practical global networks.

Question 36: In the passage, which of the following ts NOT true of the Internet?

A. It has become increasingly less popular.

B. It has created a sense of financial security

C. It tends to be unreliable

Question 37: As it can be inferred from the passage, what benefits does Internet II have over the Internet I?

A. Small businesses pay higher premiums to access to the Internet

B. Internet II contains more information than the Internet.

C. Internet II has fewer users and therefore is faster to access

D. There is no governmental intervention regulating Internet II.

Question 39: The word “harness" in paragraph 4 is closest in meaning to

Question 40: According to the author, what is one reason why the Internet is sometimes slow?

A. Phone lines are often too busy with phone calls and fax transmissions to handle Internet traffic.

B. Most people do not have computers that are fast enough to take advantage of the Internet.

C. Often a request must travel through many computers before it reaches its final destination.

D. Scientists take up too much time on the Internet, thus slowing it down for everyone else. 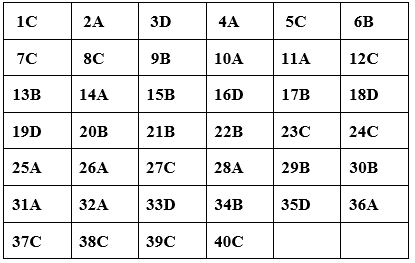