Mark the letter A, B, C, or D on your answer sheet to indicate the word that differs from the other three in the position of primary stress in each of the following questions.

Question 5. People in every part (A) of the world readily (B) and easily communicates (C) by means (D) of electronic mail.

Question 6. The diversity of life on this planet is amazed (A) . So (B) many differrent (C) forms of intelligent life (D)!

Mark the letter A, B, C, or D on your answer sheet to indicate the correct answer to each of the following questions.

Question 8. Some scientists say that it is still not too late to minimize the effects of climate change________ enough money and effort are invested in correct projects.

A. she started to work for an international company

B. It took her 2 years to find a good job

C. the students carried out many experiments

D. her job came up to her expectation.

A. In comes the teacher

B. In came the teacher

C. In the teacher was coming

D. In was coming the teacher

A. to make his students to understand it

B. in order that his students can understand it

C. so as to that his students could understand it

D. so that his students could understand it

Question 12. After you’ve ___ your brother at the swimming pool. Could you do some shopping for me?

Question 13. As my secretary will be away for a couple of days, would you be kind enough to ________ my correspondence?

A. Unless I had

B. If there were not

C. If it had not for

D. Had it not been for

Question 15. The United States consists of fifty states, ______ has its own government.

B. each of which

C. each of them

D. each of that

Question 16. Sue: “The lecturer was a tall thin man with white hair.”

Question 17. It is necessary that a life guard _______ the swimming pool while the children are taking their swimming lessons.

Question 18. If energy ___ inexpensive and unlimited, many things in the world would be different.

Question 19. People________how to dye their clothes even before they knew how to read and write.

Mark the letter A, B, C, or D on your answer sheet to indicate the most suitable response to complete each of the following exchanges.

A. How are the cakes?

D. What do you think about the cakes?

B. That’s very kind. Thank you

C. Thanks! Same to you

D. Not at all. Don’t mention it

Mark the letter A, B, C, or D on your answer sheet to indicate the word(s) CLOSEST in meaning to the underlined word(s) in each of the following questions.

Question 22. I am sure that they will be sacked on the spot.

Question 23. When went to the airport to see her off , we had a traffic jam.

A. say good bye to her

C. take care of her

D. look for her

Question 25. The journalist refused to disclose the sourse of his information.

Mark the letter A, B, C, or D on your answer sheet to indicate the sentence that is closest in meaning to each of the following questions.

Question 26. Sam is twenty-two years old, and his sister is eleven.

A. Sam is twice as old as his sister.

B. Sam’s sister is eleven years younger than him.

C. Sam is older than his sister two times.

Question 27. “Why don’t we ban the sale of alcohol at football matches,” said the man.

A. The man suggested that they would ban the sale of alcohol at football matches.

B. It was suggested that the sale of alcohol at football matches be banned by the man.

C. The man suggested that the sale of alcohol at football matches should be banned.

D. It was suggested that the man should ban the sale of alcohol at football matches.

Question 28. The boy said to his teacher, “I haven’t finished the assignment yet. I’m really sorry”.

A. The boy apologized to his teacher for not having finished the assignment.

B. The boy apologized his teacher for not having finished the assignment.

C. The boy said sorry to his teacher for not having finished the assignment.

D. The boy apologized to his teacher for having not finished the assignment.

Question 29. He had spent all his money. He decided to go home and ask his father for a job.

A. Spent all his money, he decided to go home and ask his father for a job.

B. Having spent all his money, he decided to go home and ask his father for a job.

C. In spite of having spent all his money, he decided to go home and ask his father for a job.

D. Deciding to go home and ask his father for a job, he had spent all his money.

Question 30. He may seem friendly. He’s not to be trusted.

A. However he seems friendly, he’s not to be trusted.

B. Friendly may he seem, he’s not to be trusted.

C. No matter friendly he seems, he’s not to be trusted.

D. Friendly though he may seem, he’s not to be trusted.

Read the following passage and mark the letter A, B, C, or D on your answer sheet to indicate the correct word or phrase that best fits each of the numbered blanks from 31 to 35.

From the next year, every student in their final rear at our school will study for a compulsory Diploma of Practical Achievement. This will be in addition to the normal examinations. Up to now, the course has been optional, but from now on every student must (31)_____ it.The aim is to (32)_____ students with “life skills”, which the Diploma divides into eight categories. These cover a range of things relevant to life beyond school, from sending an e-mail to giving presentation to an audience. Under the heading “survival”, (33)___, students can learn car mainternance, first aid and cooking. We have discovered that many students cannot do simple things such as mend a puncture or boil an egg. At the other extreme, the Diploma includes such things as how to design a webpage and how to cope if someone has a heart attack. It has been called a “Diploma in Common Sense”. On the course, students will not be taught in the traditional (34)_____, but rather will be guided and encouraged to do things for themselves. This is above all a practical “hand-on” course. To a greater or lesser extent, good schools have always tried to (35)_____these skills. Unfortunately, students have not always shown much interest because such skills are not directly related to passing exams for higher education. We hope this will change now that we have a proper course that will lead to a recognised diploma. 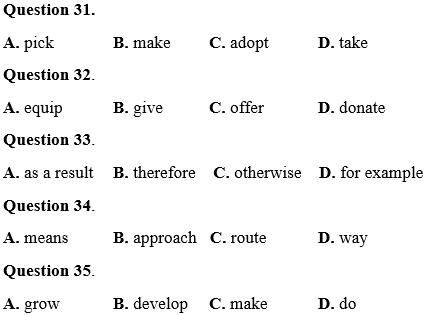 Read the following passage and mark the letter A, B, C, or D on your answer sheet to indicate the correct answer to each of the questions from 36 to 42.

Archaeological records paintings, drawings, and carvings of humans engaged in activities involving the use of hands indicate that humans have been predominantly right-handed for more than 5,000 years. In ancient Egyptian artwork, for example, the right-hand is depicted as the dominant one in about 90percent of the examples. Fracture or wear patterns on tools also indicate that a majority of ancient people were right-handed.

Cro-Magnon cave paintings some 27,000years old commonly show outlines of human hands made by placing one hand against the cave wall and applying paint with the other . Children today make similar outlines of their hands with crayons on paper. With few exceptions, left hands of Cro-Magnons are displayed on cave walls, indicating that the paintings were usually done by right-handers.

Anthropological evidence pushes the record of handedness in early human ancestors back to at least 1.4 million years ago. One important line of evidence comes from flaking patterns of stone cores used in toolmaking: implements flaked with a clockwise motion (indicating a right-handed toolmaker) can be distinguished from those flaked with a counter-clockwise rotation (indicating a left-handed toolmaker).

Even scratches found on fossil human teeth offer clues . Ancient humans are thought to have cut meat into strips by holding it between their teeth and slicing it with stone knives, as do the present-day Inuit. Occasionally the knives slip and leave scratches on the users` teeth. Scratches made with a left-to-right stroke direction (by right-handers) are more common than scratches in the opposite direction (made by left-handers).

Still other evidence comes from cranial morphology: scientists think that physical differences between the right and left sides of the interior of the skull indicate subtle physical differences between the two sides of the brain. The variation between the hemispheres corresponds to which side of the body is used to perform specific activities. Such studies, as well as studies of tool use, indicate that right- or left-sided dominance is not exclusive to modern Homo sapiens . Populations of Neanderthals, such as Homo erectus and Homo habilis , seem to have been predominantly right-handed, as we are.

Question 36. What is the main idea of the passage?

A. Human ancestors became predominantly right-handed when they began to use tools.

B. It is difficult to interpret the significance of anthropological evidence concerning tool use.

C. Humans and their ancestors have been predominantly right-handed for over a million years.

D. Human ancestors were more skilled at using both hands than modern humans.

Question 38. What does the author say about Cro-Magnon paintings of hands?

A. Some are not very old.

B. It is unusual to see such paintings.

C. Many were made by children.

D. The artists were mostly right-handed.

Question 39. The word “clues” in line 14 is closest in meaning to

Question 40. The fact that the Inuit cut meat by holding it between their teeth is significant because……

A. the relationship between handedness and scratches on fossil human teeth can be verified

B. it emphasizes the differences between contemporary humans and their ancestors

D. it demonstrates that ancient humans were not skilled at using tools 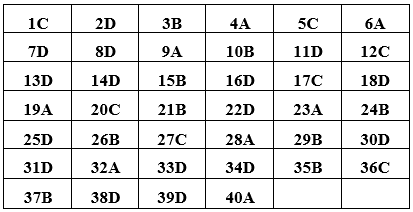