Mark the letter A, B, C, or D on your answer sheet to indicate the most suitable response to each of the following sentences

A. Not at all. I've finished my job

C. Of course not. I still need it now

D. I think not

Mark the letter A, B, C, or D on your answer sheet to indicate the word(s) CLOSEST in meaning to the underlined word(s) in each of the following

Question 3: An international medical conference initiated by Davison resulted in the birth of the League of Red Cross Societies in 1991.

Question 4: He drove so fast that I really felt my life was in danger.

A. at the target

Mark the letter A, B, C, or D on your answer sheet to indicate the correct answer to each of the following sentences

C. If I would have

D. Could I have

A. in order to

B. with a view to

C. in order that

A. has been living

C. will have been living

D. will be living

B. neither is he

D. either isn’t he

Question 12: Many young people in rural areas don`t want to spend their lives on the farm like______ parents.

Question 16: To preserve that _________, it was necessary to preserve the people that had created it.

Mark the letter A, B, C, or D on your answer sheet to indicate the word whose underlined part differs from the other three in pronunciation in each of the following questions

Read the following passage and mark the letter A, B, C, or D on your answer sheet to indicate the correct word or phrase that best fits each of the numbered blanks

Schools in the United States have not always had a large number of libraries. As recently as 1958 about half of the public schools in the United States had no libraries at all. The (19)_______of public school libraries increased dramatically when the federal government passed the Elementary and Secondary Education Act of 1965, which provided funds for school districts to improve their education programs and facilities, including their libraries. (20) _______, many educators claim that since the legislation was passed federal spending has not increased sufficiently to meet the rising cost of new library technologies such as computer databases and Internet access.

Because the federal government provides only limited funds to schools, individual school districts (21)______ on funds from local property taxes to meet the vast majority of public schools tend to reflect the financial capabilities of the communities in which they are located. Districts in wealthy suburbs often have fully staffed libraries (22)________ abundant resources, spacious facilities, and curricular and instructional support. In (23) __________school districts in many poor areas house their libraries in ordinary classrooms or in small rooms. The libraries in such areas are generally staffed by volunteers, who organize and maintain books that are often out-of-date, irrelevant, or damaged. 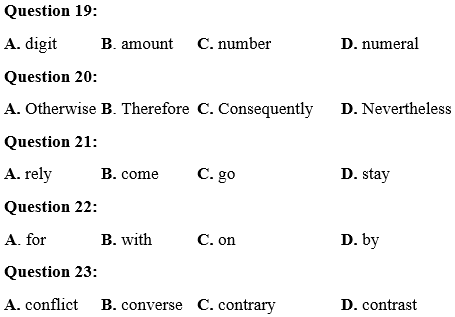 Mark the letter A, B, C, or D on your answer answer sheet to indicate the underlined part that needs correction in each of the questions

Question 24: By the time Robert will finish writing the first draft of his paper, most of the other students will have completed their final draft

Question 25: The team leader demanded from his team members a serious attitude towards work , a good team spirit, and that they work hard

B. his team members

D. and that they work hard

Question 26: Each of the beautiful cars in the shop was quickly sold to their owner

Read the following passage and mark the letter A, B, C, or D on your answer answer to each of the questions

An air pollutant is defined as a compound added directly or indirectly by humans to the atmosphere in such quantities as to affect humans, animals, vegetation, or materials adversely . Air pollution requires a very flexible definition that permits continuous change. When the first air pollution laws were established in England in the fourteenth century, air pollutants were limited to compounds that could be seen or smelled – a far cry from the extensive list of harmful substances known today. As technology has developed and knowledge of health aspects of various chemicals has increased, the list of air pollutants has lengthened. In the future, even water vapor might be considered an air pollutant under certain conditions. Many of more important air pollutants such as sulfur oxides, carbon monoxide, and nitrogen oxides, are found in nature. As the Earth developed, the concentrations of these pollutants were altered by various chemical reactions; they became components in biogeochemical cycle. These serve as an air purification scheme by allowing the compounds to move from the air to the water or soil on a global basis, nature's output of these compounds dwarfs that resulting from human activities.

However, human production usually occurs in a localized area, such as a city. In this localized regions, human output may be dominant and may temporarily overload the natural purification scheme of the cycle. The result is an increased concentration of noxious chemicals in the air. The concentrations at which the adverse effects appear will be greater than the concentrations that the pollutants would have in the absence of human activities. The actual concentration need not be large for a substance to be a pollutant; in fact the numerical value tells us little until we know how much of an increase this represents over the concentration that would occur naturally in the area. For example, sulfur dioxide has detectable health effects at 0.08 parts per million (ppm), which is about 400 times its natural level. Carbon monoxide, however, as a natural level of 0.1 ppm and is not usually a pollutant until its level reaches about 15 ppm.

Question 27: What does the passage mainly discuss?

A. The economic impact of air pollution

B. What constitutes an air pollutant

C. How much harm air pollutants can cause

D. The effects of compounds added to the atmosphere

Question 28: The word "adversely" is closest in meaning to

Question 29: It can be inferred from the first paragraph that

A. water vapor is an air pollutant in localized areas

B. most air pollutants today can be seen or smelled

C. the definition of air pollution will continue to change

D. a substance becomes an air pollutant only in cities

Question 30: The word "these" in the second paragraph is closest in meaning to

A. the various chemical reactions

B. the pollutants from the developing Earth

C. the compounds mover to the water or soil

D. the components in biogeochemical cycles

Question 31: For which of the following reasons can natural pollutants play an important role in controlling air pollution?

A. They function as part of a purification process.

B. They occur in greater quantities than other pollutants.

C. They are less harmful to living beings than are other pollutants.

D. They have existed since the Earth developed.

Question 32: The word "localized” is closest in meaning to

Question 33: The word "detectable" in the third paragraph is closest in meaning to

Question 34: Which of the following is best supported by the passage?

B. One of the most important steps in preserving natural lands is to better enforce air pollution laws.

C. Scientists should be consulted in order to establish uniform limits for all air pollutants.

D. Human activities have been effective in reducing air pollution.

Mark the letter A, B, C, or D on your answer sheet to indicate the semtence that best combines each pair of sentences in the following questions

A. People should both cut down the trees and throw rubbish in the park

B. People should neither throw rubbish nor cut down the trees in the park.

C. People should throw rubbish and cut down the trees in the park.

D. People should either throw rubbish or cut down the trees in the park

Question 36: The team reached the top of the mountain. The team spent a night there.

A. The team had not only reached the top of the mountain, but they spend a night there as well.

B. Not only did the team reach the top of the mountain but they also spent a night there

C. Not only did the team reach the top of the mountain but they also spent a night there as well

D. The team both reach the top of the mountain but they also spent a night there

Read the following passage and mark the letter A,B,C or D on your answer sheet to indicate the correct answer to each of the questions

Reading to oneself is a modern activity which was almost unknown to the scholars of the classical and medieval worlds, while during the fifteenth century the term “reading” undoubtedly meant reading aloud. Only during the nineteenth century did silent reading become commonplace.

One should be wary, however, of assuming that silent reading came about simply because reading aloud was a distraction to others. Examinations of factors related to the historical development of silent reading have revealed that it became the usual mode of reading for most adults mainly because the tasks themselves changed in character.

The last century saw a steady gradual increase in literacy and thus in the number of readers. As the number of readers increased, the number of potential listeners declined and thus there was some reduction in the need to read aloud. As reading for the benefit of listeners grew less common, so came the flourishing of reading as a private activity in such public places as libraries, railway carriages and offices, where reading aloud would cause distraction to other readers.Towards the end of the century, there was still considerable argument over whether books should be used for information or treated respectfully and over whether the reading of materials such as newspapers was in some way mentally weakening. Indeed, this argument remains with us still in education. However, whateverits virtues, the old shared literacy culture had gone and was replaced by the printed mass media on the one hand and by books and periodicals for a specialised readership on the other.

By the end of the twentieth century, students were being recommended to adopt attitudes to books and to use reading skills which were inappropriate, if not impossible, for the oral reader. The social, cultural and technological changes in the century had greatly altered what the term “reading” implied.

Question 37: Reading aloud was more common in the medieval world because ______.

A. people relied on reading for entertainment

B. silent reading had not been discovered

C. there were few places available for private reading

D. few people could read to themselves

A. for everybody’s use

Question 39: The development of silent reading during the last century indicated ______.

A. an increase in the average age of readers

B. an increase in the number of books

C. a change in the nature of reading

D. a change in the status of literate people

A. the decreasing need to read aloud

B. the development of libraries

C. the increase in literacy

D. the decreasing number of listeners 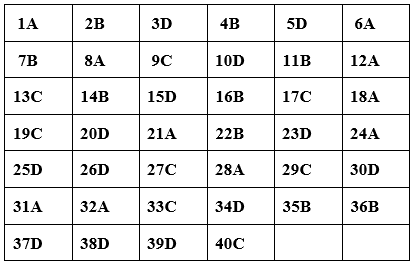